The developer seeking to re-imagine Eastridge Mall and give it an entirely new identity cautioned that the vision won’t materialize overnight, assuming it happens at all.

“This is not done,” said Stephen Rosenburgh, CEO and president of Charlotte-based U.S. Developments, of his group’s effort to acquire the Gastonia shopping center and gain control of its future. “It’s a long way from being done. It’s a very complex project.”

But a significant step was taken with U.S. Developments entering into a formal ‘memorandum of understanding’ with the city of Gastonia late last month. It substantiated that the city is endorsing the plan put forth by the firm to bring new mixed-use construction to the real estate surrounding the existing mall. And it established an official partnership between the two entities that only stands to coax the project along. 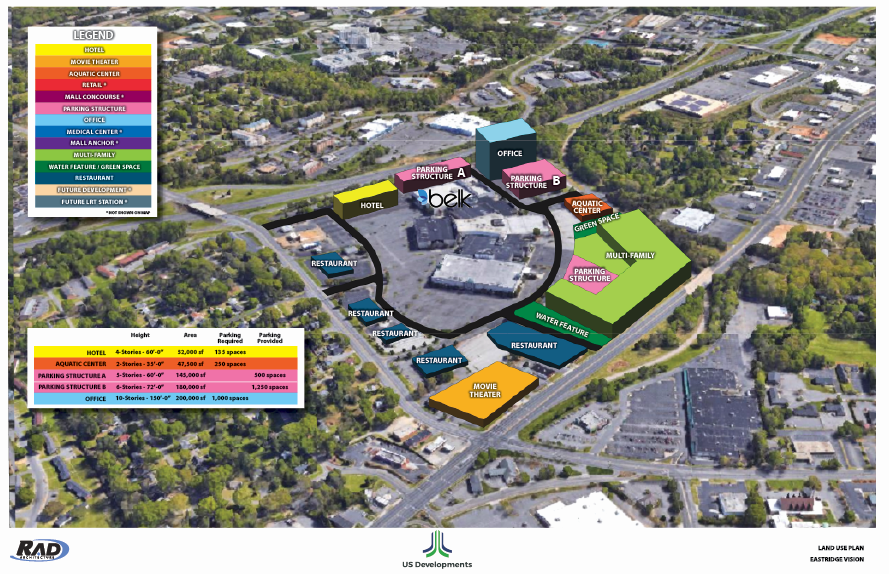 “We have a couple of other hurdles, but it was very important to us that the city wanted us and wanted us on terms that made sense,” said Rosenburgh. “What we wanted to do with this MOU is set out the broad brush concepts that we can all work with.”

Eastridge Mall spans two stories and offers more than 919,000 square feet of retail space. But U.S. Developments wants to take advantage of the expansive, mostly unused parking lot that surrounds the mall, by establishing a hotel, restaurants, multi-family housing and office space, and other amenities such as a bowling alley, movie theater and more. An 800-space parking deck would be constructed to make up for the loss of surface spaces that are there now.

The nonprofit known as Gaston Aquatics has also announced its plan to build a $6 million, 35,000-square-foot aquatics center on the site, partnership with U.S. Developments.

When all is said and done, it could result in an investment of between $100 million and $150 million, which has prompted local officials to refer to the potential venture as “transformational.”

“If we’re even close to that ballpark, that’s is amazing,” said Gastonia City Councilman Robert Kellogg. “It would be a phenomenal game-changer for that area.”

Aligning with the community’s goals

U.S. Developments has been talking with the city about its bold vision for the property for several months now. The sticking point is that for anything to pan out, the firm will have to convince the current mall owner, New York-based CityView Commercial, to sell it. CityView bought the shopping center in 2013 as an investment opportunity, and it has struggled to maintain tenants since then as a result of major changes within the retail shopping industry.

Having the city on board with the plan was critical from the time they began talking with Gastonia leaders earlier this year.

“We have a premise in our company that we don’t fight City Hall,” he told council members during a recent meeting. “If we can fit into the vision you have for your community, that’s great.”

The goal is to take the many assets that Gastonia already offers and multiply them within the region, Rosenburgh said.

“We see this as a multi-use center,” he said. “Retail is in trouble. The mall concept we all grew up with is dead. Just go to Eastridge and you can see that.”

Rosenburgh also foresees a substantial medical and health-care component factoring into the new growth around the existing mall.

“We’ve been working with CaroMont (Health). We’ve looked at some medical malls, and they’re very interesting to us,” he said. “We think using the benefit of (CaroMont Regional Medical Center), and the interstate, we can make this into some type of medical facility where you would have multiple users and go for four or five specialties in one place.”

Rosenburg said there’s no specific timetable moving forward. At this point, he said it’s just a matter of reaching a purchase price and terms that will be satisfactory to CityView, as well as Belk and Dillard’s, which each share a stake in the property.