RAD successfully transformed what was a historically under-performing retail site into this dynamic mixed-use/ lifestyle center. Visibility issues, caused by the site’s elevated grade above the primary access road, were resolved by spilling a circulation core and plaza down to the street level. An icon tower and view corridor were created to provide interest and views to the main tenant level.  ParkTowne is a prime location is directly across from Park Road Shopping Center and home to multiple tenants that enjoy the bustling intersection of Woodlawn Road and Park Road. 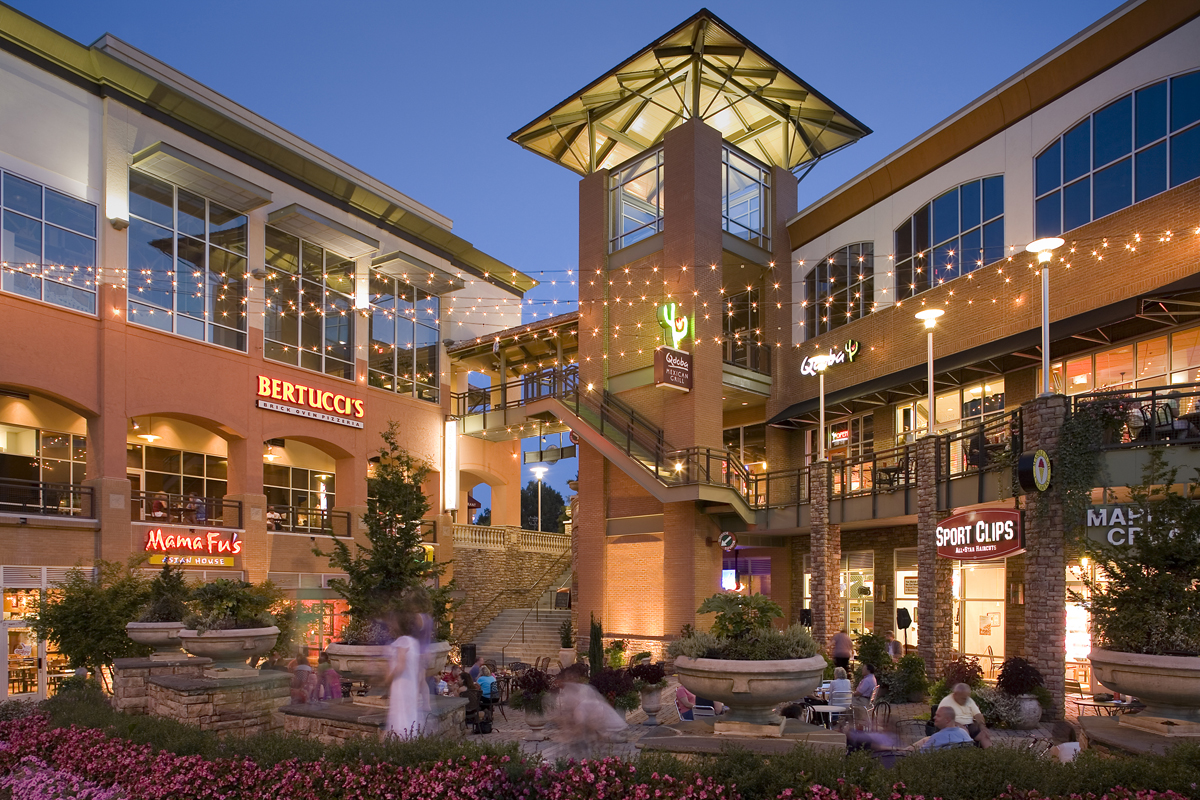 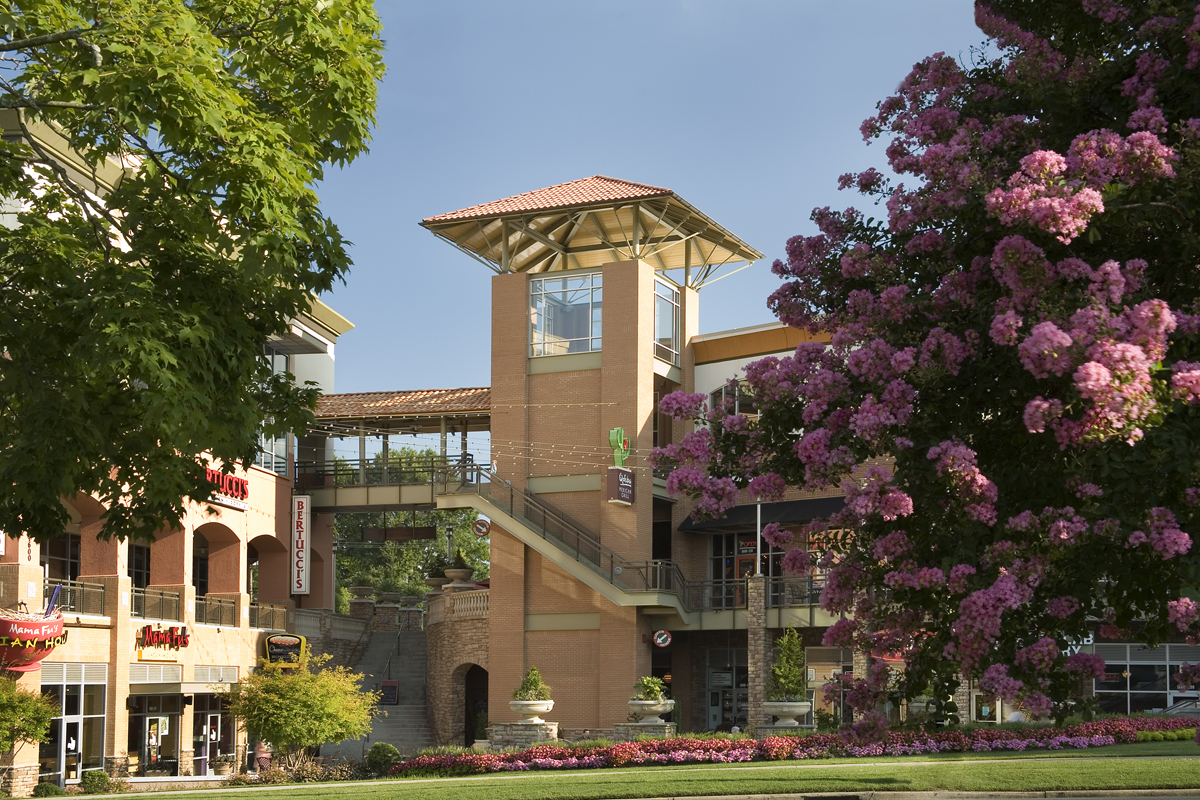 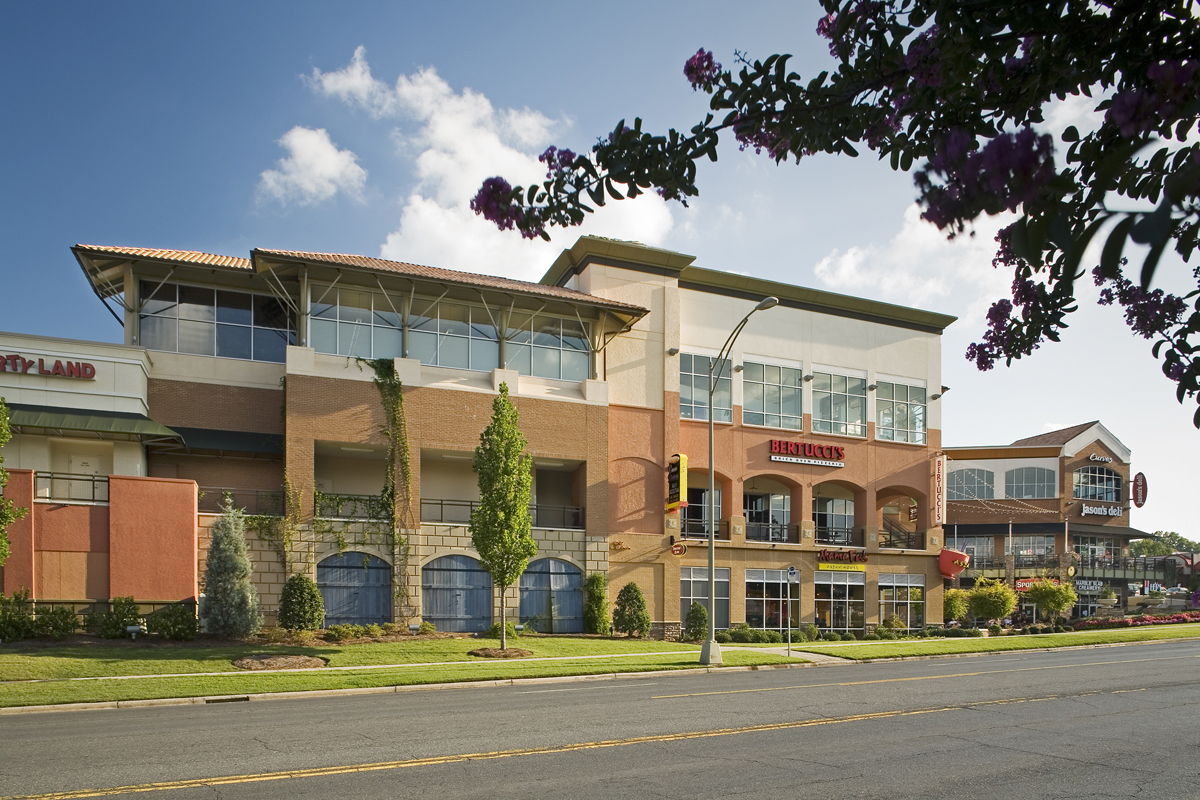 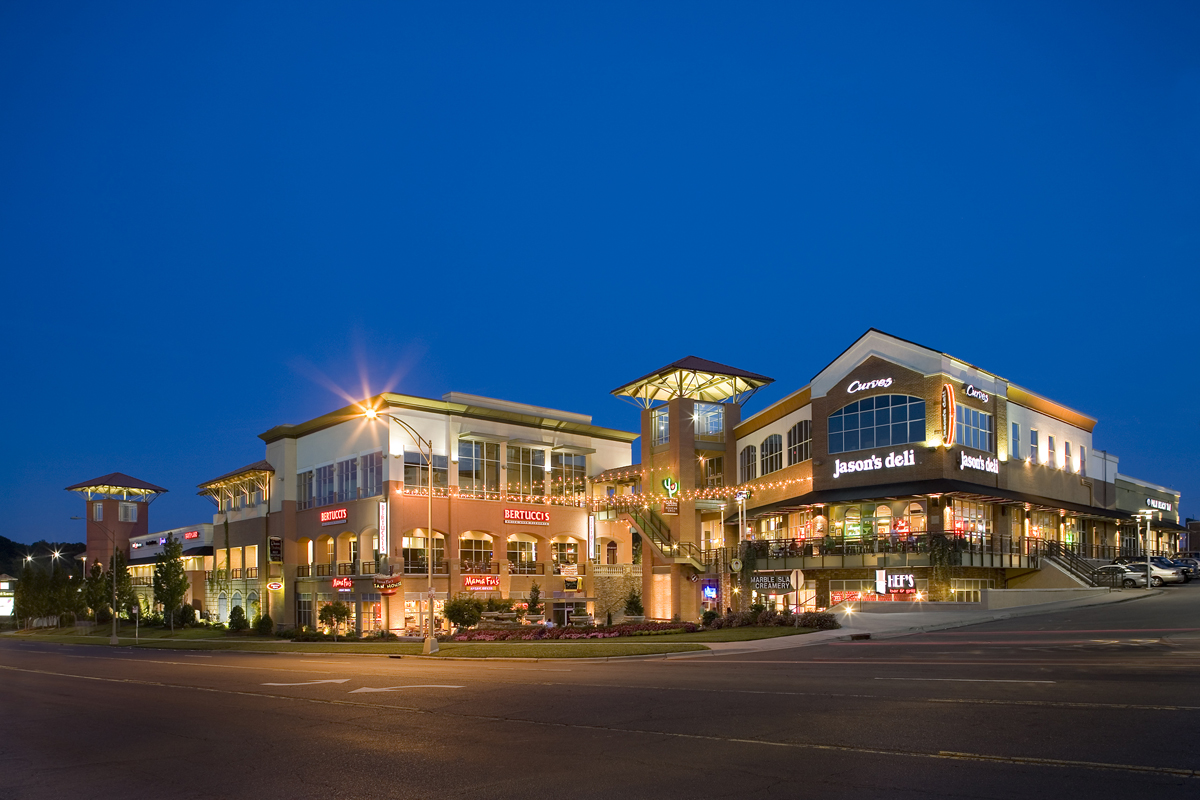 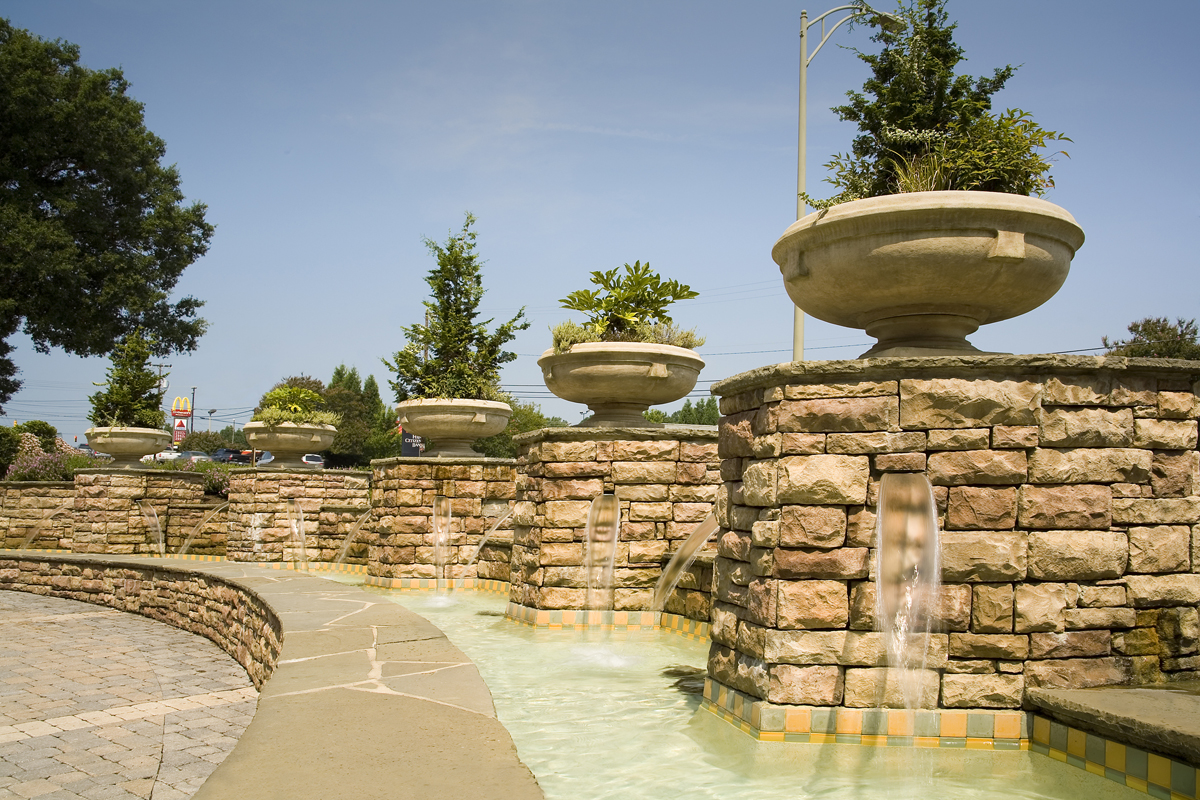 Unfortunately for the Hannaford’s grocery chain, its Woodlawn Road site across from Park Road Shopping Center proved to be the exception. Terry Dalton, principal of DMR Architecture, says “when it closed, it showed that location can’t guarantee success.”

So when Dalton was asked by Afshin Ghazi, president of the Ghazi Co., to design a new shopping center, ParkTowne Village, on the site, they knew that good design — always a must when it comes to retail centers — was even more important than usual because they had to overcome the location’s stigma.

The two were a winning combination. Ghazi says leasing went better than expected, and the first tenants opened their doors in September 2002. Construction was completed in early 2003, and the center quickly became 100% leased, as it remains today. “Our success is determined by our tenants’ success,” he notes. “We track their sales, and they say they’re doing great.”

The site offered major challenges for design and construction. It sits more than 20 feet above street level along Woodlawn and rests on granite, making excavation prohibitively expensive. Even so, says Rick Handford, president of Myers & Chapman, his company spent eight weeks in early 2002 removing rock before they could start building anything.

“It was one of the most difficult sites I’ve ever worked on,” Ghazi says.

In addition, Myers & Chapman had to demolish the five-year-old, 65,000-square-foot building that housed Hannaford’s — a structure the grocer had constructed — without damaging the surrounding asphalt parking lot. Handford had no emotional connection to the building, and neither did Ghazi. “Did I think about reusing it?” Ghazi muses. “For about one second.”

Ghazi and Dalton agree that a major reason for Hannaford’s lack of success was that it couldn’t be seen from the street. Whatever strengths the grocer enjoyed with its products, pricing and store design, passersby often didn’t even know it was there.

To boost awareness of the site, Dalton brought the buildings down to the ground level along Woodlawn. An outdoor plaza connects street-level restaurants, while stairwells and walkways serve the main, upper level. A faux bell tower acts as a beacon for shoppers.

“It was more expensive this way, but the center has to be inviting and enchanting,” says Ghazi, who would not disclose the project’s cost.

Dalton also sees the design as a marketing tool. “People are building shopping centers everywhere, and a traditional approach won’t work — you need to differentiate,” he says. “Our design encourages outdoor participation and creates a social hang-out place. Afshin knows who he is marketing to, and you have your design fit the demographics you want to lease to.”

“We attract affluent shoppers from Myers Park and SouthPark, as well as office workers from SouthPark — we get a lot of weekday traffic,” Ghazi says. “But we draw families, too, and the plaza is kid-friendly. We want people to be comfortable here if they are in shorts or dressed to a T.”

This was the first time Ghazi had teamed with Dalton, and the two hit it off immediately. “I knew what I was looking for, and they were very responsive,” Ghazi says. “They draw what you want them to draw, not their sense of what they think it should be.”

Part of what gives ParkTowne Village its “presence,” as Dalton calls it, is the creative use of a diverse combination of materials and varied window styles, with a variety of spacing and openings.

As in an old village, the shops appear to have been built at different times for different purposes, enticing shoppers to explore. He dubs the result an “updated Italian hill village;” Ghazi calls it “modern rustic Italian.”

“It creates a texture, a feel, a sense of place,” Dalton says. 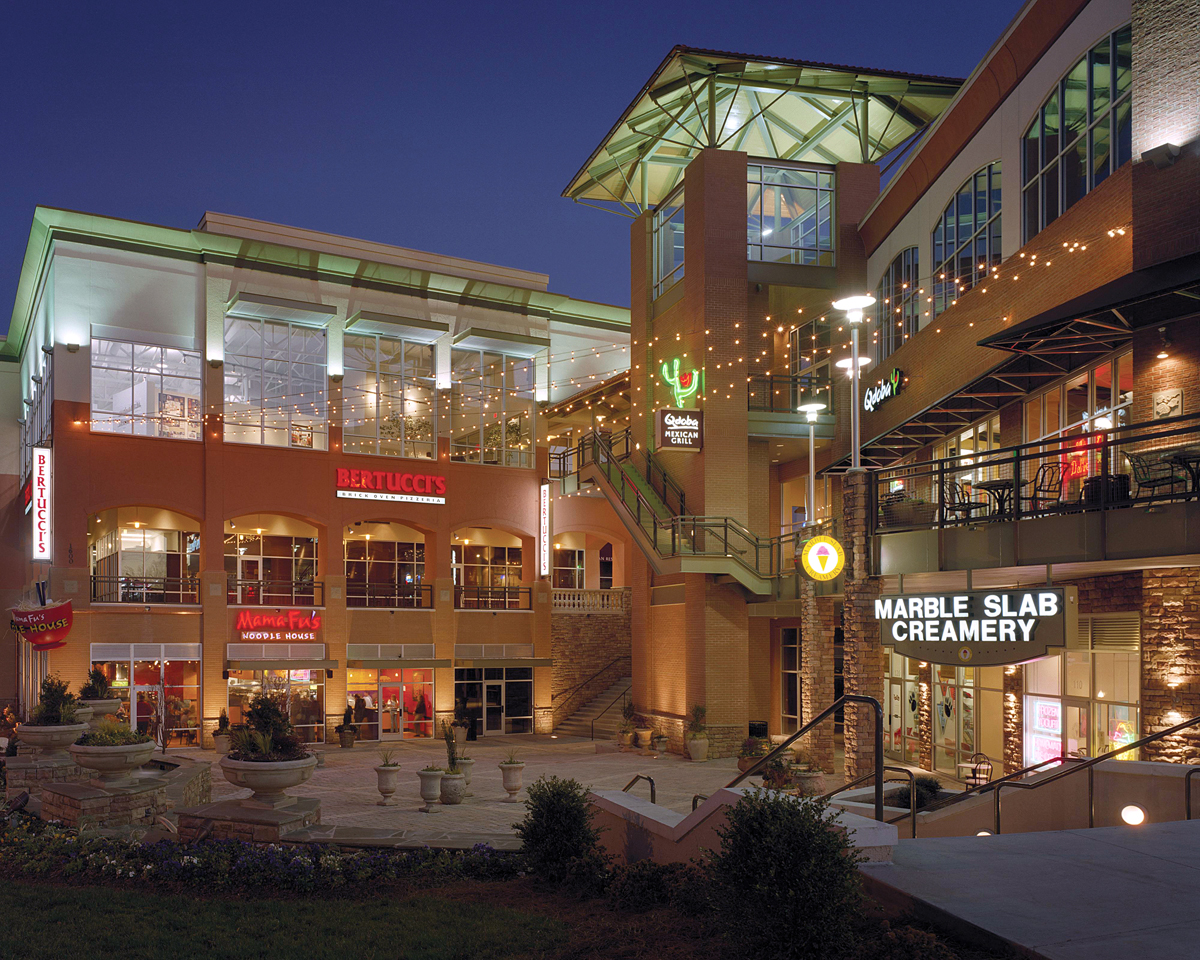